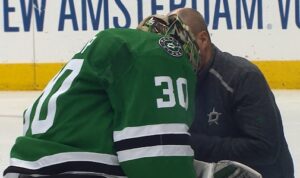 Dallas Stars goalie Ben Bishop, who took a shot off the collarbone in Sunday’s Game 6 and will start in Tuesday’s Game 7 at Enterprise Center.  The St. Louis native told reporters in Dallas on Monday that he skated and is looking forward to getting back on the ice.

“You have padding, but it doesn’t matter when the guy (Colton Parayko) has probably the second-hardest shot in the league,” said Bishop. “Obviously, didn’t turn out the way we wanted to and we have an opportunity to play a Game 7. Obviously, got to go out there and do our job.”

• David Perron scored his second career winning goal in the playoffs in Game 6 and first since the series clincher in Game 5 of the 2012 conference quarterfinals (3-1 W vs. San Jose).

• Alex Pietrangelo has ten points of the playoffs (2-8—10 in 12 games).  He became the third Blues defenseman to reach double-digit scoring in multiple postseasons.

The game will start shortly after 7 p.m. CT on NBCSN.

Previous Post: « Missourinet Morning News 5-7-2019
Next Post: Flash flood watch in effect for much of central and southwest Missouri (AUDIO) »