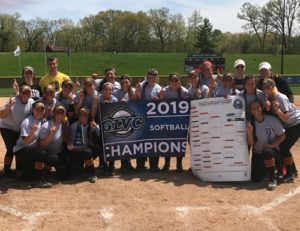 No. 1 University of Missouri-St. Louis has won the 2019 Great Lakes Valley Conference Softball Championship after defeating No. 2 and 12th-ranked University of Indianapolis, 1-0, at the EastSide Centre in East Peoria, Illinois, Sunday afternoon.

With its 14th-straight win, Missouri-St. Louis (35-17) collects its fifth league title in program history and the first since 2017 while also earning the Conference’s automatic qualifying spot for the NCAA Division II Tournament. This was third all-time meeting between the two teams for the coveted hardware, as the Tritons took the trophy home in 2015 and the Greyhounds nabbed it in 2016.

Previous Post: « If it’s May, it must be Indy
Next Post: Down seven, Mizzou baseball storms back to takes series at Tennessee »