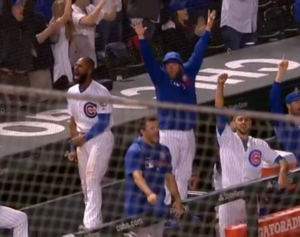 >>Cubs Tear Through Cardinals At Wrigley

(Chicago, IL)  —  Kris Bryant hit his fourth career grand slam in the Cubs’ six-run eighth inning to lead them to a 13-5 victory over the Cardinals at Wrigley Field.  Willson Contreras, Anthony Rizzo and David Bote each drove in two runs, helping Chicago leapfrog St. Louis for first place in the NL Central.  Paul DeJong and Marcell Ozuna went deep in the ninth for St. Louis, which lost its season-high fourth straight game.  Adam Wainwright pitched five-plus innings while dropping to 11-and-4 in 26 career games at Wrigley Field.

Manager Mike Shildt doesn’t believe the club should overreact to losing one series.

(Detroit, MI)  —  Brandon Dixon drilled a walk-off three-run homer in the 10th inning to lift the Tigers past the Royals 5-2 in Detroit.  Nick Castellanos and Miguel Cabrera also plated runs for the Tigers, who took the rubber match of the weekend series.  Buck Farmer was credited with the win.  Hunter Dozier hit a solo homer in the eighth to tie the game for KC, which has dropped three-of-four.  Ian Kennedy took the loss.

(Monterrey, Mexico)  —  Alex Bregman clubbed a grand slam as the Astros dropped the Angels 10-4 in Monterrey, Mexico.  Carlos Correa and Michael Brantley each added two-run homers for Houston, which swept the Angels in the two-game set south of the border.  Justin Verlander pitched into the seventh inning and gave up four runs but secured the win for the Astros.  Jonathan Lucroy homered twice for the Halos in defeat and David Fletcher added a solo shot.  Matt Harvey was charged with the loss, his third.  The Angels dropped to 15-and-19.

(San Diego, CA)  —  Hunter Renfroe hit a grand slam with two outs in the bottom of the ninth to lift the Padres to an 8-5 win over the Dodgers in San Diego.  Franmil Reyes also went yard for San Diego.  Adam Warren got the win for the Padres, who avoided a three-game sweep and improved to 19-and-16 on the year.  Chris Taylor and Max Muncy each homered for the Dodgers.  Kenley Jansen took the loss for Los Angeles, which finished 3-and-3 on its six-game road trip.

(Chicago, IL)  —  Xander Bogaerts crushed a grand slam in the eighth inning to lift the Red Sox to a 9-2 win over the White Sox in Chicago.  Mitch Moreland added a pair of RBI on the afternoon.  Rick Porcello went six innings and only surrendered two runs.  Brandon Workman got the win for Boston, which has won six of its last seven.  Ryan Cordell and Jose Abreu homered for the White Sox.  Kelvin Herrera took the loss after giving up five runs in two-thirds of an inning for Chicago, which has lost three straight.

>>Pirates Walk Off Against A’s

(Pittsburgh, PA)  —  It was a Marte par-tay in Pittsburgh, as the centerfielder hit a three-run home run in the 13th to walk the Pirates off to a 5-3 win over the Athletics.  Adam Frazier had an RBI single earlier in the 13th after the Bucs found themselves down 3-1 after the top half of the inning.  Tyler Lyons picked up the win.  The Pirates have won two in a row to climb back above .500 at 16-and-15.  Kendrys Morales and Stephen Piscotty each had a run-scoring hit in the top of the 13th to give the A’s the lead.  It took Fernando Rodney just 16 pitches to give up four runs on three hits and a walk to take the loss.

(Milwaukee, WI)  —  Christian Yelich hit his league-leading 15th home run after missing five-straight to lift the Brewers to a 3-2 win over the Mets in Milwaukee.  Lorenzo Cain had an RBI on a sac fly in the third, but left the game in the sixth after getting hit on his non-throwing hand.  X-rays were negative.  Zach Davies pitched two-run ball into the eighth to pick up the win and help the Crew finish off the three-game sweep.  Josh Hader struck out the side in the ninth for his ninth save.  Juan Lagares hit a solo homer in the seventh to bring the Mets to within one.  Jason Vargas gave up three runs on three hits in four innings before exiting with a hamstring injury.

(Philadelphia, PA)  —  Zach Eflin went seven innings and allowed just one run as the Phillies picked up a commanding 7-1 win over the Nationals in Philadelphia.  Rhys Hoskins drove in a pair of runs while Bryce Harper, Jean Segura and Eflin each added an RBI for the Phillies, who have won seven of their last 10.  Kurt Suzuki went yard for the Nationals.  Anibal Sanchez took the loss and fell to 0-and-5.  Washington has lost eight of its last 11.