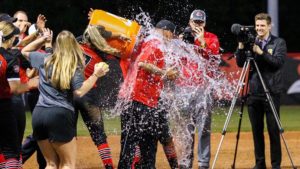 Courtesy:  SEMO Athletics
Southeast Missouri is the top seed in this year’s eight-team Ohio Valley Conference Tournament which is scheduled for May 8-11 at Choccolocco Park in Oxford, Alabama. SEMO was awarded the #1 seed after winning a coin flip to break its tie with Jacksonville State. Both school’s names were put in a hat before the coin toss and JSU was drawn. JSU Head Coach Jana McGinnis called “tails,” but the coin landed “heads” giving SEMO the top seed.

The Redhawks make their 18th OVC Tournament appearance and third in five years under head coach Mark Redburn. SEMO claimed the #1 seed for the sixth time in school history and is the top seed for the first time since 1999.