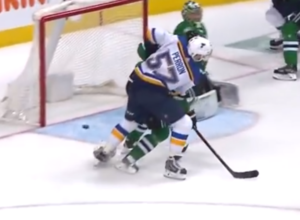 The Blues scored three unanswered goals to beat the Stars 4-1 in Dallas and force a Game Seven in their Western Conference semifinal series.  David Perron, Jaden Schwartz and Sammy Blais scored between the second and third periods to lift St. Louis.  Alex Pietrangelo scored a minute into the game to give them an early 1-0 lead.

Blais talks about getting the opportunity

Jordan Binnington stopped 22 of 23 shots to secure the win.  Tyler Seguin scored on the power play midway through the first for Dallas to tie the game at one-all.  Ben Bishop gave up four goals on 20 shots after leaving in the third with an apparent shoulder injury.  Stars head coach Jim Montgomery told reporters after the game that Bishop underwent precautionary x-rays and looked “fine.”

It will mark the second time in the past four seasons that the teams have encountered each other in a winner-take-all second round contest. Dallas was eliminated on home ice by St. Louis in the 2016 Western Conference Semifinals.

Game Seven will be Tuesday in St. Louis starting at 7 p.m.