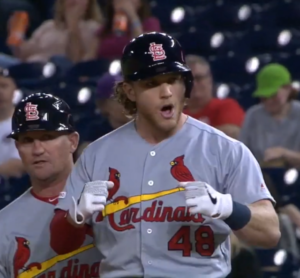 (Washington, DC)  —  Adam Wainwright pitched two-run ball into the seventh inning as the Cardinals edged the Nationals 3-2 in Washington.  Harrison Bader’s two-run single in the fourth put St. Louis ahead.  Kolten Wong’s bunt single scored Paul DeJong started the scoring in the inning.  The Cards have won four in-a-row and nine of their last 10.  Adam Eaton and Victor Robles hit back-to-back homers in the third to put the Nats up 2-0.  Aníbal Sánchez fell to 0-and-4 with the loss.  Washington has dropped five of its last six.

(Seattle, WA)  —  Kyle Schwarber launched a two-run homer in the eighth inning to rally the Cubs to a 6-5 win over the Mariners in Seattle.  Edwin Encarnacion’s solo shot in the bottom of the seventh had staked the M’s to a 5-4 lead.  Daniel Descalso and Anthony Rizzo also homered for Chicago, which has won three in-a-row and six of its last eight games.  Brandon Brennan took the loss for Seattle.  Starter Felix Hernandez struck out eight over six innings of four-run ball.  The Mariners have lost three straight and six of their last eight.

>>Brewers Hold Off Rockies In Ninth

(Milwaukee, WI)  —  Jesus Aguilar hit a three-run homer in the seventh to help lift the Brewers to a 4-3 win over the Rockies in Milwaukee.  The Brewers led 4-0 in the ninth before Colorado broke through for three to make it close.  Jhoulys Chacin got the win with six scoreless innings and Josh Hader posted his seventh save.  Milwaukee has won four-of-five.  Nolan Arenado had an RBI double and Ian Desmond a two-run homer in the ninth for Colorado.  German Marquez took the loss.  The Rox have dropped three straight.

(Arlington, TX)  —  Bryan Reynolds and Starling Marte homered in a three-run 11th inning as the Pirates rallied to beat the Rangers 6-4 in Arlington to snap an eight-game losing streak.  Pittsburgh put up three runs in the ninth to tie the game and set up extra innings.  Joey Gallo homered in the bottom of the 11th to get one back for Texas.  Asdrúbal Cabrera had a two-run single for the Rangers, who had their two-game winning streak snapped.  José Leclerc could not hold the lead in the ninth and blew the save.

>>Mets Walk Off Reds In Extras

(Flushing, NY)  —  Pete Alonso hit a sacrifice fly in the 10th inning to lead the Mets to a 4-3 win over the Reds in Flushing.  Todd Frazier homered for New York in the win.  Starter Jason Vargas went five and one third innings and only allowed one run.  Drew Gagnon got the win after one and one-third scoreless innings for the Mets, who have won two of their last three.  Kyle Farmer and Jose Peraza both singled in the ninth to tie the game at three.  Eugenio Suarez homered for Cincinnati in the setback.  Raisel Iglesias took the loss in the 10th for the Reds, who have lost three of their last four.