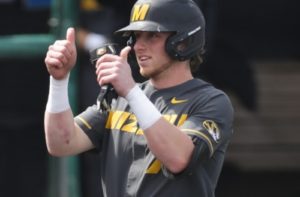 After going 4-and-0 last week and sweeping South Carolina in a three-game SEC series, the Mizzou baseball team is ranked 24th. They are 30-15-1, playing .500 ball in the SEC and take on SEMO today before a three-game series at Tennessee this weekend.

Here is what Baseball America had to say about the Tigers:

The Missouri Tigers were a near miss in the rankings after a series win over LSU a few weeks ago, and now get into the Top 25 for the first time this season after a sweep of South Carolina. In Friday’s game, the Tigers fell in an early 2-0 hole, but scored five unanswered runs from that point on, and held onto the lead with the help of three hitless, scoreless innings of relief from righthander Ian Bedell. Lefthander T.J. Sikkema was his vintage self Saturday, throwing seven scoreless innings with ten strikeouts. He got plenty of offensive support, including a 3-for-5 game from catcher Chad McDaniel. The third game of the series was called after seven innings because of an extended weather delay that occurred after the inning concluded, so in a way, it was a walk-off win for Mizzou, as it took the lead in the bottom of the seventh on a two-run homer off the bat of DH Peter Zimmerman.