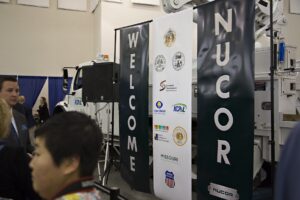 Nucor is the largest steel producer in the United States.

Nucor Sedalia general manager Kevin Vandeven tells Missourinet Sedalia affiliate KDRO (AM 1490) that it was a “challenging winter”, adding that crews fought mud and rain too.

“We’re out of the ground, we’re on schedule to start up late this year,” Vandeven says. “We want to strike an arc in November of this year, and that involves firing up the furnace and getting our first heat of steel through the process.”

He says they’ve hired about 120 employees so far, to fill three shifts. The steelworker jobs will pay an average salary of $65,000.

Vandeven says they’re still taking applications, adding that they plan to bring on a fourth shift in the future.

“We’re going to hire about another 20 people this month, so we’re up to about 120 on our team right now. This will get us close to where we need to be. It will fill out three full shifts,” says Vandeven.

He says the employees are being trained at Nucor mills in places like Texas, Mississippi, Alabama, Arkansas, Illinois and Utah. They’re learning how to be steelmakers.

Vandeven tells KDRO he’s pleased with Sedalia’s workforce quality. Economic Development Sedalia-Pettis County was instrumental in getting the company to locate there.

Charlotte-based Nucor has said that the Sedalia location allows them to take advantage of the abundant scrap supply in the immediate area. Nucor’s website notes the company is North America’s largest recycler.

The company announced in November 2017 that it was building the Sedalia plant. It’s being built near the Union Pacific rail line.