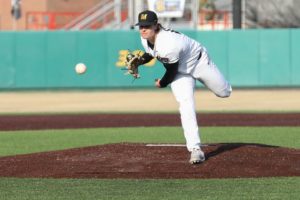 Mizzou Baseball junior LHP TJ Sikkema has been named the Southeastern Conference Pitcher of the Week.  He shut down South Carolina this past Saturday (April 27) at Taylor Stadium. Sikkema tossed 7.0 shutout frames with ten strikeouts while not allowing a single hit. The 10 K’s upped his career total to 238, surpassing former Tiger Max Scherzer for seventh place all-time on Mizzou’s career strikeouts list.

Monday marks Sikkema’s first career SEC Pitcher of the Week award and third overall honor by the league office. In his freshman campaign, he was named SEC Co-Freshman of the Week twice (May 22, 2017 // March 20, 2017).