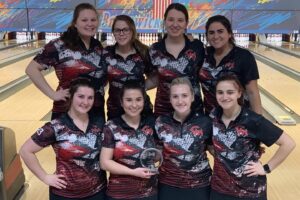 Last week the National TenPin Coaches Association (NTCA) came out with their final Women’s Bowling rankings for the 2018-19 season.  Central Missouri moved up one place in the national poll to No. 11. They also came in third in the Division II/III poll. The Jennies finished in second-place at the MIAA Tournament. They had an overall record of 86-48.

UCM had four named to the All-MIAA in Katey Furze, Paytynn Kuhns, Tatum Ruffalo and Stephanie Richards. Furze was also an NTCA All-American.

National Champions Stephen F. Austin were voted number one with runner-up Vanderbilt at number two. McKendree, Nebraska and Sam Houston State make up the top five. McKendree and Wisconsin-Whitewater were the two ahead of the Jennies in the Division II/III poll.