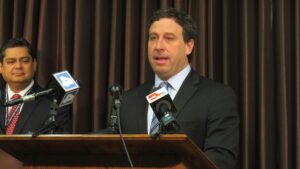 St. Louis County Executive Steve Stenger has been indicted by a federal grand jury on charges of bribery, mail fraud and theft of honest services. The indictment alleges Stenger of providing political favors in exchange for campaign donations.

The St. Louis Post-Dispatch is reporting Stenger’s attorney, Scott Rosenblum, saying Stenger has also resigned as county executive. The newspaper says Stenger has been a target of a U.S. government investigation into pay-for-play allegations.

According to the U.S. Attorney’s Office, the indictment made public today alleges that from October 2014 to Dec. 31, 2018, “Stenger and various individuals and companies schemed to defraud and deprive the citizens of St. Louis County of their right to his honest and faithful services, and the honest and faithful services of the St. Louis Economic Development Partnership’s Chief Executive Officer, through bribery and the concealment of material information.”

If convicted, each charge carries a maximum penalty of 20 years in prison and a $250,000 fine. Restitution is also mandatory. In determining the actual sentences, a judge is required to consider the U.S. Sentencing Guidelines, which provide recommended sentencing ranges.

The case is being investigated by the Federal Bureau of Investigation and the Postal Inspection Service with the assistance of the Internal Revenue Service Criminal Investigations. Assistant U.S. Attorney Hal Goldsmith is handling the case for the U.S. Attorney’s Office.

Stenger is scheduled to be arraigned at 1 p.m. this afternoon in a federal court in St. Louis.