(NASCAR)—Clint Bowyers hopes for a good day at NASCAR’s longest track lasted all of ten laps before his car was caught up in a crash with five others only ten laps into the 188-lap race.  Bowyer had run in the top three in the early laps before dropping back. 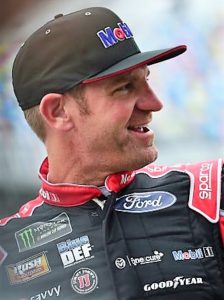 He was trailing another group of cars when cars driven by Bubba Wallace and Ryan Blaney lightly touched on the high bank of the first turn, sending Wallace up the track into two other cars.  Bowyer swerved to the track’s apron but his car swerved back uptrack into the cars of teammate Kevin Harvick and Matt Tifft.  Harvick and Tifft could not continue.

His pit crew made repairs and got him back on track, Bowyer telling them that if they could repair his car he could regain ten positions by race’s end because other cars would be taken out in other crashes.  He was back on track, still on the lead lap but had to return to the pits when bent bodywork flattened a tire.  He returned to the track running 34th and finished 29th, six laps behind winner Chase Elliott.

“We started great…but I started to see what was about to happen and tried to get out of that pack. I should have just pulled onto the apron and just stopped,” he said after the race. “But I couldn’t, and they wrecked and took us out. It’s pretty sad. I’d like to have seen how we could have raced today.”

Bowyer, however, remains in the top ten in the standings for the playoffs in the last ten races of the season.

(INDYCAR)—IndyCar will debut its new cockpit protection device during its May races at the Indianapolis Motor Speedway. 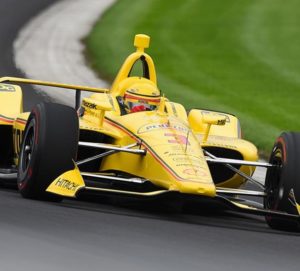 The Advanced Frontal Protection Device is a titanium device (seen just in front of Helio Castroneves’ cockpit last week) designed to deflect flying objects that might otherwise get into the cockpit.  Several teams used it during last week’s open test at the track and drivers pronounced themselves satisfied with the results.  The device will be used for the first time on Mary 11 when drivers will compete on the speedway’s road course for the annual Grand Prix of Indianapolis.

We’ll have an interview about the device and other things later this week with Jay Frye, the former University of Missouri football player who is the new President of Indycar.

(FORMULA 1)—Valtteri Bottas pulled slightly ahead of teammate Lewis Hamilton in the opening corners of the Azerbaijan Grand Prix and beat Hamilton to the checkered flag for a second and a half.  It’s the fourth straight win for Mercedes.  Hamilton said after the race he’d been “too friendly” to Bottas in the first corner but, “He drove a fantastic race and made no mistakes, so he deserved the win.”

The win moves Bottas one point ahead of Hamilton in the driver point standings.

Sebastian Vettel, in a Ferrari, got the last place on the podium.