You are here: Home / Sports / Lock sees slide stop at pick 42 by the Broncos 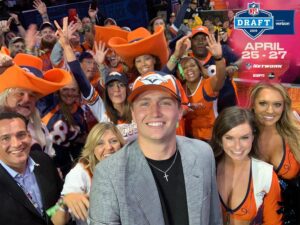 Mizzou Football senior QB Drew Lock was selected by the Denver Broncos in the second round of the 2019 NFL Draft on Friday evening. Lock was taken with the draft’s 42nd overall selection, the 10th pick of the second round. Lock is the sixth Tiger selected in the NFL Draft under head coach Barry Odom and is the highest pick since 2017 when Charles Harris was selected 21st overall by the Miami Dolphins.

Lock is the 13th Mizzou player selected in the draft’s first two rounds since 2009, and is the highest drafted Mizzou QB since Blaine Gabbert was taken 10th overall in 2011, a year that Mizzou had a pair of first-round picks.

Lock closed his career with 34 games of 200+ passing yards, accomplishing that feat in 29 of his final 32 games. He closed his Mizzou career holding 10 of the top 25 single-game passing yardage marks in school history, the most of any QB in school history. A Missouri native from Lee’s Summit, Mo., Lock also holds eight of the program’s top 25 single game passing efficiency marks, the most in program history.

His final season in black & gold may have been his best as he finished his senior season with career-best marks in completion percentage (62.9%), fewest interceptions (eight), completions (275), rushing yards (175), rushing TDs (six) and accounted for 34 total touchdowns. He went 275-for-437 for 3,498 total yards (second-best single season mark in his career and sixth in school history) and threw for 28 touchdowns and just eight interceptions during his senior season. His combined QB rating during his senior season was 147.65, the second-best of his career and fifth-best in school history.