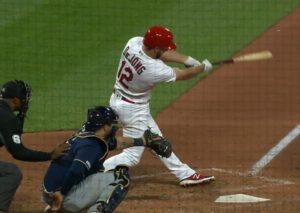 (St. Louis, MO)  —  Yadier Molina drove in two to lead the Cardinals to a 4-3 win over the Brewers in St. Louis.  Paul DeJong homered and Andrew Miller picked up the win for St. Louis after throwing a scoreless eighth inning.  Jordan Hicks allowed the Brewers to cut the deficit to one but held on for the save.  The Cards have won five of their last six.  Travis Shaw homered twice in the setback for the Brewers.  Alex Wilson took the loss for Milwaukee, which has dropped six of its last seven.

(St. Petersburg, FL)  —  Mike Zunino homered for the second straight day, collected three hits and drove in two as the Rays beat the Royals 5-2 in St. Pete.  Jalen Beeks picked up the win with seven strikeouts in four-and-two-thirds scoreless innings.  Emilio Pagán struck out two in a spotless ninth to earn a save.  The Rays led the AL East at 16-and-8.  Homer Bailey was pulled in a three-run second, retiring only three of the nine batters he faced with four scoring.  Martín Maldonado homered for KC, which has lost five straight and owns the majors’ worst record at 7-and-17.

(Pittsburgh, PA)  —  David Peralta plated the go-ahead run in the sixth inning as the Diamondbacks clipped the Pirates 2-1 in Pittsburgh.  Adam Jones doubled in a run in the fourth for the Snakes, who are 6-and-2 on their current 10-game east coast road trip.  Luke Weaver struck out seven over six-and-a-third innings of one-run ball for the win.  Greg Holland closed it out for his fifth save.  Francisco Cervelli hit an RBI double for the Bucs’ only run in the second inning.  Trevor Williams yielded two runs in seven frames to suffer his first loss.

(Chicago, IL)  —  Willson Contreras hit a three-run double in a four-run first inning as the Cubs cruised to a 7-2 win over the Dodgers at Wrigley Field.  Anthony Rizzo drilled a two-run homer in the second inning and Javier Baez added a solo shot in the seventh for the Cubs, who have won six of their last seven.  Jose Quintana struck out seven over seven innings of two-run ball for the win.  Justin Turner and Chris Taylor plated runs for LA, which has dropped two-of-three since a six-game winning streak.  Kenta Maeda took the loss.

(Cincinnati, OH)  —  The Reds put up four runs in the sixth inning and held on for a 7-6 win over the Braves in Cincinnati.  Yasiel Puig [[ YAH-see-el  Pweeg ]] plated the deciding run with a sac-fly and also had a two-run homer in the first for the Reds, who have won four-of-five.  Tucker Barnhart also went deep and Robert Stephenson came away with the win.  Raisel Iglesias closed it out for his fifth save.  Dansby Swanson and Ender Inciarte both had two hits, an RBI and scored a run for Atlanta, which had won its previous two.  Kevin Gausman fell to 1-and-2 with the loss.

(Boston, MA)  —  The Tigers pulled off a day-night doubleheader sweep of the Red Sox at Fenway Park.  Brandon Dixon had a three-run double and Spencer Turnbull fired five shutout innings for his first career win as Detroit took the nightcap 4-2.  Michael Chavis homered for Boston, while Hector Velazquez took the loss.  In the opener, Ronny Rodriguez went 3-for-4 with a home run and Grayson Greiner also went deep as the Tigers won 7-4.  Matthew Boyd went seven for the win.  Chris Sale struck out 10 over five innings of two-run ball in a no-decision.  Xander Bogaerts homered twice in defeat.

(Cleveland, OH)  —  Pablo Lopez threw six-and-a-third innings of shutout ball as the Marlins beat the Indians 3-1 in Cleveland.  The Fish scored all three runs in the fifth, ignited by Jorge Alfaro’s solo homer.  Sergio Romo pitched a perfect ninth for his third save.  Miami has won four of its last five games.  Carlos Carrasco threw four shutout innings before tweaking his knee trying to cover first base.  Neil Ramirez replaced Carrasco and promptly gave up a homer to Alfaro on the very first pitch to take the loss.  The Tribe has dropped three straight.