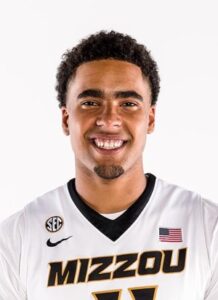 Mizzou forward Jontay Porter announced on Friday that he will officially enter his name in the 2019 NBA Draft pool.

“I’ll be declaring for the 2019 NBA Draft,” Porter said. “I’d like to sincerely thank everyone who has helped me get to this point in my journey, especially my family, coaches and teammates. I’m excited for this next step.”

Porter could become Mizzou’s 46th player selected in the NBA Draft in program history and the second in as many years, joining his brother Michael Porter, Jr., who was selected by the Denver Nuggets with the 14th pick of the 2018 NBA Draft. Heading in to the 2019 NBA Draft, Martin has had eight players selected in the last five seasons, including three at Tennessee, four at California-Berkeley and Porter Jr. at Mizzou.

Porter averaged 9.9 points per game while leading the Tigers in both rebounding (6.8 boards per game) and blocked shots (55). The freshman big man steered Mizzou’s attack on the inside, collecting three double-doubles and propelling the team to a 15-2 record on the 17 occasions when he scored in double-digits.

Porter’s best stretch of the season was highlighted by a career-high 24 points at Vanderbilt (Feb. 27) and a 19-point performance against Arkansas (March 3). The impressive two-game stretch earned SEC Freshman of the Week honors. His career night at Vanderbilt was aided by a 9-for-10 performance from the field while he also snagged seven rebounds and dished out six assists. He became the first Tiger to register a 20-5-5 game since the 1998-99 season.

The 2019 NBA Draft is set for June 20 at the Barclays Center in Brooklyn, New York.