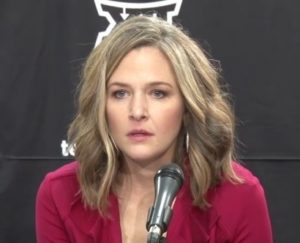 “Candi is poised to make a difference at Missouri Western,” Looney said. “We are not only adding an excellent basketball coach, but most importantly, an outstanding leader and role model for the women in our athletic program. Candi and her family will be an asset to our University and the St. Joseph community. We are thrilled to welcome Candi, Matt, Westin, William and Callahan into the Griffon family”

Named the sixth head coach at her alma mater in 2013, Whitaker turned around the program between year one and year two, going from seven wins to 15. In five seasons leading the Lady Raiders, Whitaker had four players named All-Big 12. In her final season at Texas Tech, Japreece Dean was named to the Big 12 All-Freshman Team after being named conference freshman of the week for a record six times. Whitaker led Texas Tech to four consecutive Big 12 Championship appearances and back-to-back quarterfinal appearances.  Under Whitaker’s guidance, 11 Lady Raiders were named Academic All-Big 12 with eight earning spots on the Dean’s or President’s List.

Prior to one season as associate head coach at Oklahoma State, Whitaker became one of the youngest head coaches in women’s basketball, taking over the UMKC women’s program at age 26. She won 83 games at UMKC and left as the program’s second-winningest head coach. She led the ‘Roos to their first two NCAA Division I postseason appearances, the 2010 WBI and the 2012 WNIT. Whitaker’s 2011-12 UMKC team went 22-12 and advanced to the Summit League Tournament Championship for the first time in seven years. It remains the just the second 20-win season in the program’s time as a Division I member. Between 2008 and 2012, Whitaker produced more wins than UMKC had seen in a four-year period in 16 years. Whitaker recruited and coached UMKC’s all-time leading scorer Chanzy Morrison, and she mentored 36 Academic All-Conference selections.

Then Candi White, Whitaker helped Texas Tech to back-to-back Sweet 16 appearances as a student-athlete from 2000-02. She started and played in all 64 games over two seasons under legendary head coach Marsha Sharp while totaling 232 points, 249 assists and 87 steals.

Prior to playing at Texas Tech, Whitaker played two seasons at Seward County Community College where she averaged 10.2 points and 10.8 assists and was named Honorable Mention NJCAA All-American. Whitaker’s 577 career assists at Seward County is still a record and she ranks third all-time with 225 steals.

Whitaker graduated from Texas Tech in 2002 with a degree in Exercise Sports Science and earned her Master’s in Sports Administration at Valparaiso in 2004. She and her husband, Matt Whitaker, have three sons, Westin, William and Callahan.