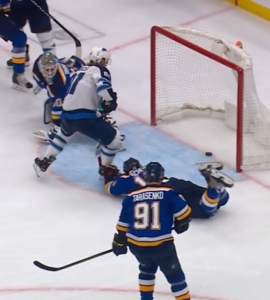 Kyle Connor scored just over six minutes into overtime to give the Jets a 2-1 win over the Blues in Game Four of their first-round playoff series in St. Louis.  Mark Scheifele tied the game at one for Winnipeg at 7:33 of the third.  Vladimir Tarasenko put St. Louis on the board with a power-play goal just 35 seconds into the third period.  Connor Hellebuyck finished with 31 saves for the Jets, while Jordan Binnington denied 37 shots for the Blues.

Both teams have had success on each other’s home ice all season.  Binnington responds.

Robbie Fabri was inserted into the lineup on the fourth line replacing Zach Sanford.  Fabri played a physical game.

The message to the team from coach Craig Berube is pretty simple heading back to Winnipeg  with the best-of-seven set is tied at two, and Game Five Thursday.

Previous Post: « MLB Recaps: Royals drop another to the Chi-Sox. Yelich does it again to the Cardinals
Next Post: Missourinet Morning News 4-17-2019 »