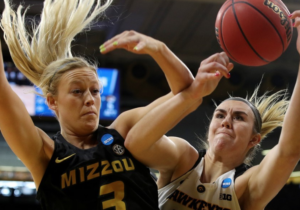 Mizzou Women’s Basketball senior guardSophie Cunningham (Columbia, Mo.) was selected by the Phoenix Mercury with the first pick in the second round of Wednesday’s WNBA Draft.

Cunningham’s 13th overall selection is the highest a Mizzou player has ever been drafted in the WNBA Draft.

Cunningham surpasses Amanda Lassiter, who was selected by the Houston Comets with the 15th pick of the first round in 2001. Cunningham is the first Mizzou player to be drafted since Bri Kulas in 2014, and the third selection during head coach Robin Pingeton’s tenure, following Kulas and Christine Flores in 2012.

The Minnesota Lynx used their first-round pick to take University of Connecticut forward Napheesa Collier sixth overall. Collier, who grew up in Jefferson City and starred at Incarnate Word in high school, averaged a double-double this season, and led the Huskies to the Final Four, averaging 20.8 points and 10.8 rebounds per game. She was named the American Athletic Conference’s player of the year and defensive player of the year as a senior.