The Missouri Transportation Department is gearing up for its busy road construction season by rolling out a new safety tool. The automated flagger aims to protect its workers from potential traffic crashes in work zones. At a press conference Monday in Jefferson City, MoDOT officials say many of their workers have had close calls with oncoming traffic, many times as a result of distracted driving. 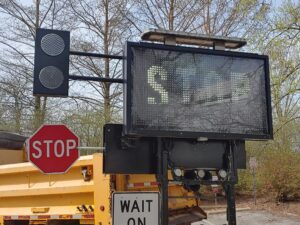 MoDOT engineer David Silvester says the automated flagger device keeps the worker off the roadway and in the trucks.

“They have the ability with a joystick to change the STOP and SLOW pattern. In addition, there’s a very large sign that says STOP or SLOW – a flashing red light if it’s in STOP and a yellow light if you’re good to go,” says Silvester.

If vehicles do not comply with the flagger signals, Silvester says a loud horn blares and bright lights flash to warn the drivers.

During this is National Work Zone Awareness Week, Silvester says the innovation is a result of MoDOT workers putting their heads together to make their jobs safer.

From 2014 to 2018, 54 people were killed and more than 3,200 were injured in Missouri work zone crashes. Since 2000, 19 Missouri Department of Transportation workers have been killed in the line of duty.

“One is too many,” says Silvester.