The Missouri Supreme Court will hear oral arguments Tuesday morning in Jefferson City in the case of a prisoner appealing his death sentence for killing a Springfield girl five years ago. 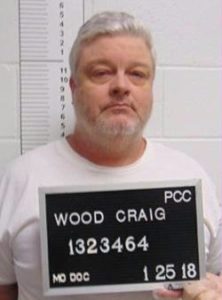 Convicted killer Craig Wood, who’s under a death sentence, is incarcerated in Potosi (2018 file photo courtesy of the Missouri Department of Corrections)

51-year-old Craig Michael Wood is currently incarcerated at the maximum-security Potosi Correctional Center in Mineral Point, under a death sentence. Wood was convicted of first degree murder for the 2014 kidnapping and killing of ten-year-old Hailey Owens in Springfield.

Defense attorneys admitted in court in August 2017 that Wood kidnapped, raped and killed Owens. Defense attorney Patrick Berrigan argued during the trial that there was substantial evidence of the lack of planning and preparation, saying it was not premeditated.

Wood’s public defender, Rosemary Percival, has filed a 136-page brief with the Missouri Supreme Court. She says that Missouri is one of only two states that allow a judge to impose a death sentence after jurors could not. Indiana is the other state.

In this case, a jury was selected in western Missouri’s Platte County and the trial was held in Springfield. The jurors were not unanimous about the death sentence, and Greene County Circuit Judge Thomas Mountjoy sentenced Wood to death.

The “Springfield News-Leader”, quoting the jury foreman, has reported that 10 jurors supported the death sentence and that two supported life in prison without parole.

State Attorney General Eric Schmitt and Assistant Attorney General Daniel McPherson have responded to Percival with a 106-page brief, which says Missouri’s statute allowing a judge to impose a death sentence when the jury deadlocks is constitutional.

Schmitt and McPherson write that the Missouri Supreme Court “has repeatedly found that procedure to be constitutional.”

Counselor Percival also argues that Missouri’s “death penalty scheme” is unconstitutional and that Judge Mountjoy abused his discretion by allowing fictional stories Wood wrote about 13-year-old girls to be mentioned during the trial.

The state disagrees, with Schmitt and McPherson writing that the stories show that Craig Wood “has an unhealthy compelling sexual interest in young teenage girls.”

The court documents say Hailey Owens was abducted on the afternoon of February 18, 2014, as she was walking home on West Lombard Street in Springfield.

Springfield Police found her body in a plastic tub in Craig Wood’s basement. The court documents say Hailey Owens died from a gunshot wound to the back of her neck.

Wood will not be in the Jefferson City courtroom on Tuesday.

While the Missouri House and Senate have approved different versions of the bill, State Rep. Curtis Trent, R-Springfield, tells Missourinet he believes it’s on track for final passage by May.

There are currently no meeting requirements for the Amber Alert System Oversight Committee. Representative Trent’s legislation requires the committee to meet at least annually to discuss potential improvements to the system.

State Sen. Eric Burlison, R-Springfield, is handling the Senate version. Burlison’s bill would require the committee to submit a report to the Legislature by January 2020 and annually after that.