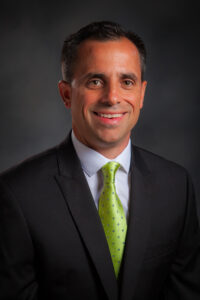 For the second time in three seasons, Northwest Missouri State University head men’s basketball coach Ben McCollum is the recipient of the NABC Division II Coach of the Year Award presented by Wilson after leading the Bearcats to the 2019 NCAA Division II championship.

Northwest Missouri State topped Point Loma Nazarene University, 64-58, on Saturday in Evansville, Ind., to take the national title and complete a remarkable unbeaten season with a 38-0 record. The Bearcats also won the NCAA championship in 2017 with a 71-61 win over Fairmont State, dropping just one out their 36 games played. Over the past three seasons, McCollum has guided the Bearcats to a remarkable record of 100-5.

A former Bearcat standout as a player, McCollum completed his 10th season as head coach and his teams have an overall record of 241-75 with six Mid-America Intercollegiate Athletic Association regular-season championships.

McCollum will receive his award on Sunday, April 7, at the annual AT&T NABC Guardians of the Game awards show in Minneapolis, Minnesota.