Renovations on the exterior of the Missouri Capitol are nearly halfway complete. In a press release from the Office of Administration, it says the $40 million project remains on budget and on scheduled with the anticipated completion at the end of 2020. 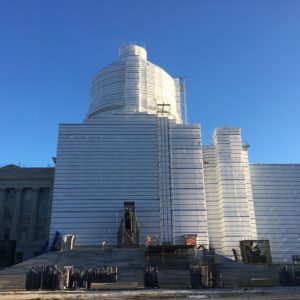 Renovation work at the Missouri State Capitol in Jefferson City

As the building’s first major construction project, it is addressing deteriorating stonework on its facades, dome and drum, water proofing, overall appearance and stabilizing the structure. Upon completion, the office says the project will extend the life of the building and ensure the historic structure is properly preserved for decades to come.

The north plaza on the north side of West Capitol Avenue was completed in December. Some minor work remains to be completed in the plaza, such as cleaning of the Louisiana Treaty Monument and sealing of the Fountain of the Centaurs liner. That work is weather dependent and is expected to be completed this spring.

The 1,400 pound bronze statue of Ceres, the Roman goddess of agriculture, which was removed from the top of the Capitol in November, is on a long visit to the spa. She is getting laser cleaning treatment to remove contaminants and preserve her natural color tones. During an evaluation of the statue, it was determined she had been struck by lightning more than 300 times.

In recent weeks, crews have worked to replace covering that rips during high winds. The repair and replacement of the covering has not affected the project’s timeline.

The Office of Administration says the public should not be alarmed when the covering rips. It is designed to come off when winds reach or exceed 50 MPH. This prevents lifting and damaging to the scaffolding and building. Recent high winds have not damaged the scaffolding or the building.

In 2014, the Missouri Legislature approved bonding for the renovations.