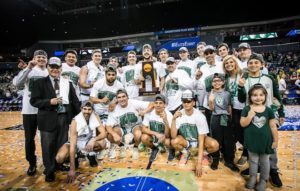 The Northwest Missouri State University men’s basketball team captured the program’s second NCAA Division II national championship with a perfect season at 38-0 following its 64-58 triumph over Point Loma Nazarene University at the Ford Center in Evansville, IN. Northwest becomes only the fifth program to record to complete a perfect season (38-0) and win the national title.

The Bearcats used a key 7-0 spurt at the end of the first half to turn a 29-26 deficit into a 33-29 lead at the break. Senior Joey Witthus hit a bucket in the paint with 1:44 on the clock to pull the Bearcats within one. Freshman Diego Bernard made a layup with 32 seconds remaining until intermission. Point Loma’s Josh Rodriguez turned the ball over with four seconds. Junior Ryan Welty got the steal and passed ahead to sophomore Ryan Hawkins who was able to drain a three-pointer at the halftime buzzer.

Witthus scored 24 points and buried a 38-foot shot-clock buzzer beater with 6:42 left that gave Northwest a 10-point lead at 56-46. Witthus was 6-of-12 from the field, including 4-of-6 from three-point range. Witthus also made all eight of his free throw attempts. Northwest led 59-54 with 1:35 to play and hit their free throws and scored a pair of layups to give Northwest the national title, 64-58.