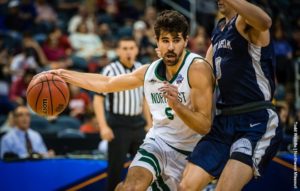 The No. 1-ranked Northwest Missouri State University men’s basketball team came away with a 76-53 win over Saint Anselm College to advance to the program’s second NCAA Division II national championship game.  The Bearcats (37-0 overall) limited the Hawks to 38.6 percent shooting from the field and held its second straight opponent to 53 points or less at the Elite Eight. Northwest came into the game ranked No. 3 in the nation in scoring defense at 62.1 points per game allowed (now 61.8 points per game allowed).

Northwest held Saint Anselm to just two made field goals in the opening 8:20 of the second half. Saint Anselm made 10-of-28 shots in the second half, while Northwest drained 18-of-29 field goals. The Bearcats ended up shooting 53.3 percent from the field. Freshman Diego Bernard provided a spark off the bench as he reached double figures in scoring at 13 points on 5-of-8 shooting. Junior Ryan Hawkins registered his 11th double-double this season with 14 points and 14 rebounds. Hawkins posted three steals to give him 79 on the year, the third-most in a single season by a Bearcat. Joey Witthus set the Bearcat single-season scoring mark with 13 points as he surpassed the record set by Justin Pitts (754 points) in 2016-17. Witthus has scored 756 points this season.

Northwest will take on Point Loma on Saturday at 2 p.m. in the NCAA Division II national championship game as the Bearcats play for their second national title in three years.  The game will be shown live on CBS.

Previous Post: « Keller nearly flawless in helping Royals get off to a good start in 2019
Next Post: #BillPollockShow–Kellie Harper @MSULadyBears coach joins me, plus hot takes from #MarchMadness @Royals and @Cardinals (PODCAST) »