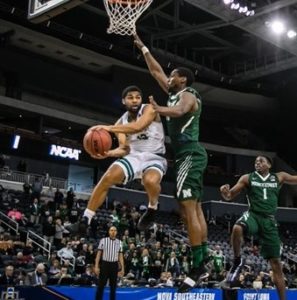 The No. 1-ranked Northwest Missouri State University men’s basketball team advanced to the national semifinals of the NCAA Division II Tournament with a 55-51 victory over the Mercyhurst University Lakers.

Mercyhurst cut the lead to three at 49-46 on a conventional three-point play from MiyKah McIntosh with 57 seconds left in the game. Following a miss on the front end of a 1-and-1 by Hudgins, Mercyhurst’s Zach McIntyre missed a game-tying three from the corner and Northwest’s Ryan Hawkins secured the rebound with 27 seconds to play. Hudgins was fouled again but he hit a pair to extend the lead back to five at 51-46.  Tyler Dougherty made two free throws with :11 remaining to give Northwest a seven-point cushion at 53-46.  A late three at the buzzer closed the gap to four.

Northwest will play St. Anselm in the national semifinals on Thursday at 6 p.m. St. Anselm scored a 91-81 win over Nova Southeastern in the first quarterfinal.