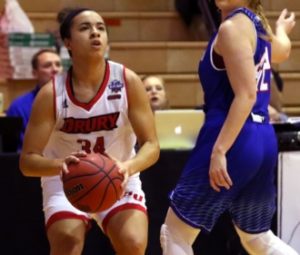 Drury’s remarkable season that saw them advance to the NCAA-II Elite Eight with an undefeated record came to an end Wednesday night in the national semifinals in a 69-60 loss to Lubbock Christian at Alumni Hall in Columbus, Ohio.  The Chaparrals, seeded fifth in the Elite Eight, advance to the national championship game with a 31-5 record while the top-ranked Lady Panthers season ends with a 35-1 mark.

“This was a good basketball team,” said Drury head coach Molly Miller told DruryPanthers.com of Lubbock Christian. “Their experience in the Elite Eight showed up tonight, and I think that was a difference.”

Drury guard Daejah Bernard set a team record for single-season steals passing Kara Rutledge’s total of 133 in the 2003-04 season. Bernard had six steals in the game and finished with 137 for the season.

Hailey Diestelkamp also set a Lady Panthers record as she broke the mark for single-season rebounds. She eclipsed the number set by Melanie Oliver in 2009-10 with her 312th rebound as the junior from Owensville had seven boards in the game to finish the year with 316.

Diestelkamp led all scorers in the game with 18 points.