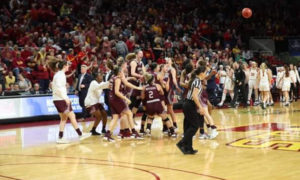 The Missouri State Lady Bears advanced to the Sweet 16 for the fourth time in school history with a 69-60 win Monday evening at third-seeded and 13th-ranked Iowa State inside Hilton Coliseum.

The 11th-seeded Lady Bears (25-9), already the lowest seed remaining in the tournament field after round one, will take on second-seeded Stanford (30-4) at 5 p.m. Saturday, March 30, in Chicago on ESPN2 after winning for the 24th time in 26 games.

MSU has to hold off several ISU runs in the second half.

The Lady Bears went on a 10-0 run for a 43-32 advantage with 4:46 left in the third, and the Cyclones (26-9) followed with a 9-0 run of their own. MSU recovered to lead 49-45 after 30 minutes, and Iowa State pulled within a point three times in the final quarter, the last with 4:32 remaining before Alexa Willard answered with a jumper and freshman Sydney Manning buried a three-pointer for a 60-54 lead with 3:37 on the clock.

Danielle Gitzen and Manning closed the game out by going 7-for-8 from the foul line to push the margin to 69-58 with 24 seconds left.

Willard led MSU with 17 points, Abby Hipp matched a career high with 11, while Gitzen added 10 to go with six rebounds and five assists. Jasmine Franklin grabbed a team-high seven rebounds to move to the No. 10 spot on MSU’s single-season list.

Missouri State shot 41 percent overall and 39 percent from the foul line, while limiting the Cyclones, the nation’s 13th-ranked scoring offense, to 19 below their season average on 35.6 percent shooting, including 2-for-17 from long range.