That’s the case for the family of Diego and Daejah Bernard from St. Joseph, Mo.  Diego is a freshman on the Bearcat men’s basketball team that is 35-0 and prepares for their Elite Eight game against Mercyhurst in Evansville, IN on Wednesday.  Deajah is a junior on the Lady Panthers team from Springfield that is 34-0 and preparing for their Elite Eight game against Nova Southeastern in Columbus, OH tonight.

Daejah was a four-year letter winner at Benton High school…She was a three-time First Team All-City, All-Conference and All-District selection and an Class 4 First Team All-State choice as a senior for Missouri’s Class 4 state champions that finished 31-0…She averaged 11.5 points, 4.9 rebounds, 4.5 assists and 4.1 steals as a senior…Scored a career high 23 points vs. Ray Pec…Was also a state track meet participant in her prep career in the high jump and long jump…Went 5’3 in the high jump good for fourth at state and took second at state in triple jump.

Daejah has started 33 games averaging 25 minutes for the Panthers and 5.6 points per game. She leads DU with 200 assists and 125 steals. 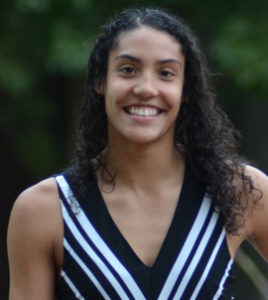 Diego was an all-state performer at Lafayette High School in St. Joseph, Mo. He was selected to play in the 2018 GKBCA All-Star Game. Bernard helped lead a senior campaign where Lafayette High School had 22 wins, a MEC Conference Championship, a District Championship and a Sectional Championship game appearance. He was named all-conference four years, all-district three years, a Class 3 all-state selection and is a member of his schools 1,000-point club.

Diego has started 24 games for the Bearcats averaging nearly 27 minutes per game and fourth on the team with 11.8 points per game.