Gov. Mike Parson has declared a state of emergency in Missouri in response to worsening flood conditions along the Missouri and Mississippi River systems. The governor says the release from upstream reservoirs, snow melt and excessive rainfall have led conditions to deteriorate. 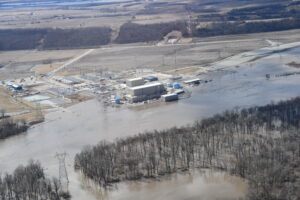 A view of the flooding damage in northwest Missouri (March 15, 2019 photo courtesy of Governor Parson’s office)

“The rising floodwaters are affecting more Missouri communities and farms, closing more roads and threatening levees, water treatment plants and other critical infrastructure,” Parson said in a press release. “We will continue to work closely with our local partners to assess needs and provide resources to help as Missourians continue this flood fight and as we work to assist one another.”

Last night, Missouri State Highway Patrol troopers rescued several people from homes and three people from a stranded boat in and around Craig, where a temporary levee failed yesterday. Ongoing sandbagging efforts today include at a water treatment plant in Forest City, in Holt County. A Red Cross shelter in Mound City is currently housing 12 people forced from their homes by flooding. The Department of Health and Senior Services has supplied tetanus shots to Atchison and Holt counties and is working to fulfill a request from Buchanan County today.

Parson reminds Missourians to always be careful around flooded areas and understand the risks floodwater poses.

• Storm drains can create an extremely dangerous situation for anyone caught in the current.

• Avoid walking through floodwater and keep children from playing in it.