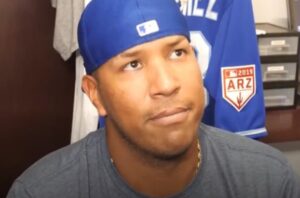 >>Salvy speaks for the first time since surgery

(Surprise, AZ)  — Royals catcher Salvador Perez was back in camp this week after having season-ending Tommy John surgery, and he spoke to reporters about his surgery, rehab and future.  Salvy was surprised he suffered the injury.

“Seriously, I never had any problem with my elbow. They showed me my MRI from 2012 and they told me I had a little bit of damage in my elbow in 2012. But I don’t remember having any problem with it. I would always put ice on my elbow or my shoulder to recover after games. That was my thing. Seriously, that was the first time I ever felt any pain.”

He’ll discuss his future this season with GM Dayton Moore.  Salvy is leaning on rehabbing in Kansas City instead of Miami and will talk with Moore about traveling for road games to help catcher Martin Maldonado in his first year with K.C.

(Scottsdale, AZ) — Jorge Lopez was roughed up for six runs, five earned, on seven hits, including two homers, in two innings, but the Royals rallied to beat the Rockies 8-7 in Scottsdale. Frank Schwindel and Hunter Dozier each homered and drove in three runs for Kansas City. The Royals will play the Reds today in Goodyear.

(Jupiter, FL)  —  Pablo López tossed six shutout innings as the Marlins blanked the Cardinals 6-0 in Jupiter.  Drew Robinson went 2-for-3 with a double for the Cards.  Daniel Ponce de Leon took the loss after surrendering seven hits and five runs in three-and-two-thirds.  St. Louis plays split-squad games today against the Yankees and Nationals.

(Memphis, TN)  —  The Cardinals are sending pitchers Austin Gomber and Daniel Ponce de Leon to Triple-A Memphis to start the season.  Both found out yesterday that they would be joining the Redbirds’ rotation.  No announcement has been made about whether Dakota Hudson will be the Cards’ fifth starter.  St. Louis opens the regular season next Thursday in Milwaukee.

Previous Post: « Parson: all available resources will be used to assist Missourians with flooding
Next Post: #BillPollockShow–More #MarchMadness prep, and baseball chatter around #Royals and #STLCards camp (PODCAST) »