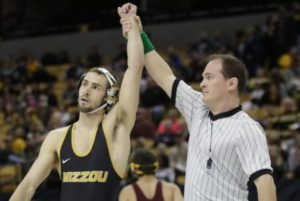 Mizzou Wrestling is in search of its fifth consecutive top-10 finish heading into the start of the 2019 Division I NCAA Championships, which begin today (March 21) in Pittsburgh, Pa., at PPG Paints Arena. The first matches begin at 11 a.m. CT.  Mizzou is coming off an eighth straight conference tournament title and is ranked fifth nationally heading into the tournament.

The Tigers have nine wrestlers competing for the second year in a row and have three top-five seeds: No. 2 Daniel Lewis (174), No. 4 Brock Mauller (149) and No. 5 Jaydin Eierman (141).  Lewis is from Blue Springs, Mauller and Eierman both from Columbia, coming from Father Tolton High School.  Mauller is also one of three true freshmen to be in nationals, joining No. 13-seeded Jarrett Jacques (157), also from Tolton and No. 20-seeded Zach Elam (HWT) from Staley, High School.

Watch the first round from ESPN