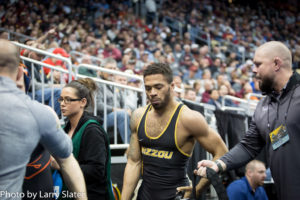 Mizzou Wrestling sent six of its nine NCAA qualifiers to the second round, and sits in sixth place in the team competition following the first session of the 2019 NCAA Division I Wrestling Championships. The highlights Thursday morning (March 21) came from the usual suspects as second-seeded 174-pounder Daniel Lewis and fifth-seeded 141-pounder Jaydin Eierman each tallied dominant pins in their opening-round bouts. Mizzou also advanced two true freshmen into the second round as No. 4-seed Brock Mauller (141) and No. 20-seeded Zach Elam (HWT) advanced in their brackets.

Also advancing to the second round were RS senior John Erneste (133) and RS junior Connor Flynn (165).

Eierman and Lewis’ pins were their 17th and 15th of the season, respectively, and the duo did so in different fashions. Eierman scored an eye-popping 16 points in the first period before wrapping up the fall while leading 20-7 in the second. Lewis used just 1:13 to lock up a cradle and earn the pin. The pins helped Mizzou rack up 12.0 points in the team race, ranking sixth after the first session. Below are the team scores.