You are here: Home / Agriculture / Missouri Congressman Graves: flooding worse than in 1993 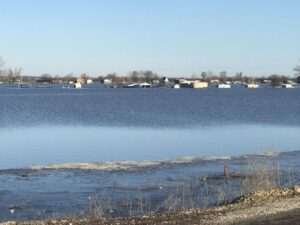 Northern Missouri Congressman Sam Graves is concerned about long-range effects of flooding underway in his region. Many people are comparing this disaster to the epic 2011 Missouri River flooding. The Tarkio Republican tells Missourinet affiliate KMA in Shenandoah, Iowa this event is worse than the flood of 1993.