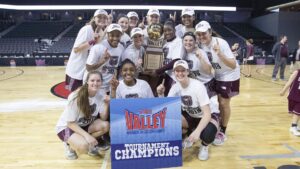 The Missouri State Lady Bears (23-9) earned a No. 11 seed in the NCAA Tournament after capturing the Missouri Valley Conference’s automatic bid, and will open their 15th NCAA appearance Saturday, March 23, against sixth-seeded DePaul in Ames Iowa. The game is slated for a 2:30 p.m. tip-off and will air on ESPN2.

The other half of the bracket in Ames is third-seeded Iowa State and No. 14 New Mexico State. The winners will play on March 25, and the champion of the four-team sub-regional advances to the Chicago Regional for the third and fourth rounds March 30 and April 1.

Drake will be the Missouri Tigers opponent in Iowa City, Iowa.  The Tigers are the No. 7 seed and the Bulldogs the No. 10 seed in a first-round matchup at approximately 3 p.m. Friday.  If Missouri wins that game, they will face the winner of 2-seed Iowa and 15-seed Mercer on Sunday for a chance at a berth in the Sweet Sixteen.