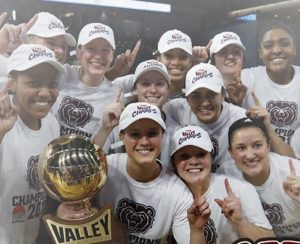 Alexa Willard scored a career-high 30 points, Sydney Manning matched her career-best with 14 and second-seeded Missouri State rolled past Drake 94-69 to win its 11th Missouri Valley Conference Tournament championship. With it goes an automatic berth in the NCAA tournament, the 15th for the Lady Bears (23-9) and their first since 2016.

Drake (27-6) had won the last two MVC Tournament championships and lost in the tourney for the first time since a semifinal setback to Missouri State in the 2016 event.

The Lady Bears never trailed after scoring the first six points of the second quarter for a 27-22 lead. They ended the quarter with another 6-0 run for a 42-35 halftime lead and then Willard took over in the third quarter.

The junior from Lebanon, Missouri scored 15 points in the quarter, including the last seven of the period as the Lady Bears built their lead to 68-47, ending any hopes of a third straight championship for Drake.d

Missouri State will learn their NCAA seeding on Monday during the Women’s Tournament Selection Show on Monday starting at 6 p.m.

Previous Post: « SLU rallies to win A-10 title…going back to the NCAA Tournament
Next Post: SLU Billikens seeded 13th. Will open the NCAA tournament on Friday »