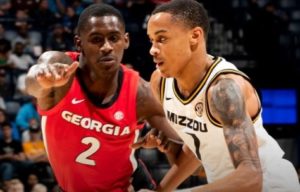 Missouri advanced in the SEC Tournament with a 71-61 opening-round victory over Georgia in Nashville.  Jordan Geist led the Tigers with a career-high 30 points.  Xavier Pinson added 15 points for Mizzou.  Missouri moves on to face Auburn today in the second round of the tourney.  Mizzou’s point guards accounted for 45 of the Tigers’ 71 points on Wednesday night. Mizzou converted 24-of-29 free throws, with Pinson and Geist going a combined 16-of-19 at the charity stripe.

Missouri took the lead for good at 45-43 on a Kevin Puryear basket with 12:05 left. Neither team led by more than seven points until the final four minutes of the game.

The Tigers face Auburn, a team they lost to by a final of 92-58.  It is the most points Mizzou has allowed this season.