You are here: Home / Education / Missouri’s Nobel Prize winner decides where his award money will go

Last October, retired University of Missouri professor and 2018 Nobel Prize winner George Smith said he would donate his prize money “in a way that would indirectly honor the award”. Smith – the school’s first-ever Nobel Prize winner – has announced that he will give the money to support students in the university’s College of Arts and Science. A press release from the university says Smith’s gift of more than $243,000 will create a new scholarship for the college’s students. 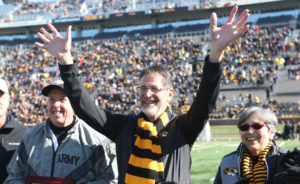 Mizzou Professor George Smith waves to the crowd at Faurot Field in Columbia on November 10, 2018, before receiving an award from Governor Mike Parson (left). Smith won the 2018 Nobel Prize in chemistry (file photo from Bill Greenblatt/UPI)

The Royal Swedish Academy of Sciences awarded Smith and two other researchers the Nobel Prize for chemistry by “harnessing the power of evolution”. Smith developed a method with the goal of producing new prescription drugs for rheumatoid arthritis, psoriasis and inflammatory bowel disease. Since then, it has also produced anti-bodies that can counteract autoimmune diseases and cure metastatic cancer, which spreads to other parts of the body.

Smith was a Mizzou professor for about 40 years in the Division of Biological Sciences.