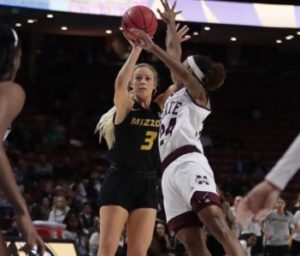 Cunningham’s 33 points are the most scored by a Tiger in an SEC Tournament game, surpassing the 29 points she scored against Kentucky in the SEC quarterfinals the day prior, and the 29 points Sierra Michaelis scored against Georgia on March 5, 2015. It is also the fifth-highest scoring total in her career, and her 10th career 30-point game.