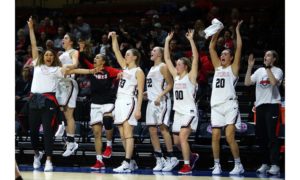 For the third straight season, Central Missouri Jennies Basketball will be playing in the NCAA Tournament. They learned Sunday as the NCAA announced the field of 64. The Jennies are the No. 3 seed in this upcoming weekend’s Central Region tournament which will be held in Hays, Kan. They will take on No. 6 Lindenwood. Friday, March 15.

UCM went 22-5 in the regular season and were the number two seed in the MIAA Championships Tournament. The second-seeded Jennies won two games and took on the No. 1 seed Fort Hays State Tigers Sunday afternoon for the crown, where the Tigers prevailed 63-56.

The top-eight teams in the Central Region advance to the NCAA Tournament. The Central Region is comprised of the MIAA, Northern Sun and Great American Conferences. The winners of the three conference tournaments all received automatic bids, those were Fort Hays State, Southwestern Oklahoma State and Minnesota-Duluth.

This year’s regional will be played Friday March 15 through Monday March 18. Fort Hays State, who won the MIAA Conference Tournament earned the No. 1 seed, will host the entire Central Region Tournament.

Drury won their third straight Great Lakes Valley Conference championship on Sunday winning the same way they have all season – with their defense. The Lady Panthers completed their three-peat holding sixth-seeded Bellarmine to 48 points in a 94-48 win in the GLVC title game at the Vadalabene Center in Edwardsville, Illinois.

Drury improved to 31-0 setting a program record in consecutive wins, and they became the first team in GLVC history to win three-straight tournament championships as well as complete an undefeated conference regular season to go with a postseason crown.