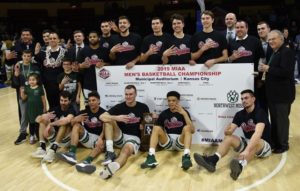 The Central Region will take place March 16 (four games), March 17 (two games) and March 19 (regional final) in Bearcat Arena in Maryville, Missouri. It is the third straight season that Northwest will serve as the region’s host.

Northwest will be taking part in its 19th NCAA tournament. It is the Bearcats’s seventh trip to the NCAA Tournament under 10th-year head coach Ben McCollum. The Bearcats are 32-0 in 2018-19 and have won six consecutive MIAA regular season titles to go with the four straight MIAA tourney crowns. Earlier today, Northwest secured the MIAA’s automatic bid the regional with an 82-53 win over Washburn in the tournament championship game.

Northwest will match up against No. 8 seed Minnesota State, Mankato, on Sat., March 16, at 6 p.m. in Bearcat Arena.

The Elite Eight will be held in Evansville, Indiana, on March 27-30 at the Ford Center.