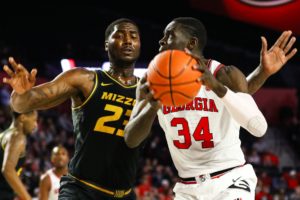 The Missouri Tigers are the number 12 seed in this week’s SEC Tournament held in Nashville, TN.  The Tigers will enter tournament play with a 14-16 record and face the Georgia Bulldogs who are the 13th seed.  Mizzou and Georgia will open the tournament on Wednesday evening at 6 p.m.  It will be exactly just one week from the day when the Tigers dominated the Bulldogs in a 64-39 win in Athens.

The 25-point victory was Mizzou’s largest in league play this season and largest over an SEC opponent since beating Arkansas, 93-63, on March 5, 2013. Mizzou held Georgia to 25.5-percent shooting from the floor.

The winner of Mizzou-Georgia will face Auburn in the second game on Thursday, 30 minutes after the noon tip of Arkansas-Florida.  The Tigers lost to Auburn on Jan 30th, 92-58.  It was the most points allowed by the Tigers this season.