Legislation that would allow Missouri’s private colleges and universities to employ police officers on-campus is expected to go before the Missouri House in Jefferson City this week, possibly on Monday. 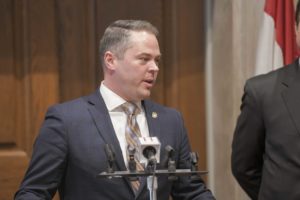 College of the Ozarks (C of O) in southwest Missouri’s Point Lookout supports the bill, and the college’s Operation Head for Crisis Management, Kurt McDonald, traveled to the Statehouse in February to testify for the bill. McDonald says it’s because of what he calls the too-often threat of an active shooter.

“Actually last year, in part of ’17 and the first part of 2018, there was a school shooting (in the United States) every month from October through June except for one month, which is terrible,” McDonald says.

McDonald notes the bill is not a mandate, and would give private colleges and universities the option.

House Bill 105 is sponsored by State Rep. Jeff Justus, R-Branson. McDonald testified in February before the House Higher Education Committee, which approved it on a bipartisan 9-0 vote.

McDonald tells Missourinet that College of the Ozarks’ Point Lookout campus is about 30 minutes away from Taney County Sheriff’s deputies in Forsyth.

“I don’t want to be the person that calls a parent in the loss of a student, and this is a way that we can put another level of protection by being our own first responders,” says McDonald.

McDonald emphasizes his respect for Taney County Sheriff’s deputies, saying this is all about response time.

Bill supporters say it would help ensure campus safety and would require a professionalism for campus security. Under Justus’ bill, the officers must take an oath of office and finish police officer training to obtain a peace officer license.

Representative Justus, Mr. McDonald and a group known as “Independent Colleges and Universities of Missouri” testified for the bill in February. While there was no testimony against the bill during the House committee hearing, McDonald says some Missouri police chiefs oppose it. He says he’s not sure why.

Justus’ three-page bill exempts any Missouri private college or university “located in a home rule city with more than one hundred fifty-five thousand but fewer than two hundred thousand inhabitants.” The House website notes that currently only applies to Springfield.

Click here to listen to the full five-minute interview between Missourinet’s Brian Hauswirth and Kurt McDonald with College of the Ozarks, which was recorded on March 8, 2019: