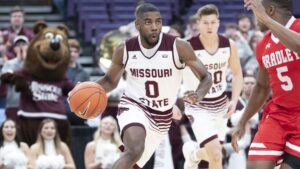 No. 5 seeded Bradley held Missouri State scoreless for a key four-and-a-half minute stint late in the second half and then held off a late challenge by MSU down the stretch to slip out of Enterprise Center on Friday with a 61-58 upset win over the Bears in the quarterfinals of the Missouri Valley Conference Tournament.

All three Missouri State seniors scored in double figures, led by 17 by Jarred Dixon, and 12 apiece from Ryan Kreklow and Josh Webster.

Keandre Cook responded with a 17-foot jump shot to give MSU the lead again on its next possession, but Bradley then reeled off six unanswered points to take a 43-38 lead with just under 10 minutes on the clock.

The next three minutes belonged to the Bears with Cook, Kreklow and Tulio Da Silva leading an 8-2 outburst by the maroon side. Then, with 6:35 to play, Dixon dropped in his third triple of the game from deep on the left wing to answer a Brown jumper and push MSU back out in front, 49-47.

However, Missouri State missed its next five shots – and eight of its next nine – while Bradley used a 9-0 run over a pivotal four-and-a-half minute stretch to lead 56-49.

Webster finally ended the Bears’ drought with a traditional 3-point play with 2:08 remaining to provide a needed spark. Then after another couple of free throws by Brown, Kreklow got to the line and pulled Missouri State within 58-54 with 91 seconds to play.

Missouri State’s defense forced Bradley into a shot clock violation on its next possession, and then Cook was fouled in the act of a 3-point shot at the 36-second mark. He made 2-of-3 as a result to make it a 58-56 game.

Moments later, the Bears fouled Nate Kennell who missed the front end of a one-and-one to open the door for MSU. But Cook’s 3-point attempt that followed ricocheted out of bounds, giving the ball back to the Braves.

Bradley had difficulty getting the ball in, and then used its last timeout. But coming out of the break, Kreklow stole the in-bound pass near mid-court, then fired a 25-footer from the top of the key that just rimmed out.

BU made 3-of-4 free throws over the last eight seconds, and Missouri State could not capture the key comeback stroke it needed in the clutch, falling by three and making an early exit from the tournament.

The loss was MSU’s third straight to end the season.

In the first half, Missouri State made six 3-pointers and held off a pair of Bradley runs to go into the intermission with a 29-22 lead. Kreklow hit two treys before the first media timeout to put the Bears up 11-3, but Bradley then reeled off six unanswered to get within two.

Midway through the half, a dunk by Ja’Shon Henry tied the game, 16-16, but Missouri State held the Braves to just two more field goals the remainder of the period, while MSU went on an 8-2 run over the last three minutes to lead by seven at the midway point.

Coach Dana Ford’s squad, which was picked eighth in the MVC preseason poll, finished the Missouri Valley Conference season with a 10-8 league ledger to tie for third place in his first season at the helm. The Bears will return two all-conference starters for next season in Da Silva and Cook.