A mid-Missouri state lawmaker proposed a constitutional amendment Monday in Jefferson City that would reduce the Missouri House’s size from 163 to 120, and would increase the State Senate from 34 to 40. 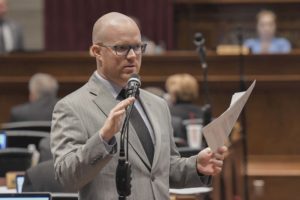 “But I think it would reduce I think in the order of a million-and-a-half, two million, maybe two-and-a-half, three million (dollars) a year in costs to the state by reducing the Legislature by this amount,” Fitzwater testifies.

Fitzwater says this is about reducing the size of government, adding that Missouri has the seventh-largest Legislature in the nation.

“We are by far the largest Legislature by our surrounding states, even Illinois has 20 fewer legislators than we do,” says Fitzwater.

If lawmakers approve the measure, Missourians would vote on the proposed constitutional amendment in November 2020, according to Fitzwater.

It remains at 163 in 2019, although there are currently two vacancies.

Under Fitzwater’s proposal, there would be three House districts in each senatorial district.

Carpenter, who’s in his fourth and final House term because of term limits, likes the concept of Fitzwater’s proposal. Carpenter tells Fitzwater it would save tax dollars.

“It should be in the millions,” Carpenter tells Fitzwater.

“Long-term, it would be millions,” Fitzwater responds.

“It would be millions of dollars a year I would think because you’re reducing by almost 40 (House members) and then staff, benefits, pay, all the costs,” says Carpenter.

Fitzwater says if Missourians approve the constitutional amendment in 2020, it would take effect in 2022 after the Census and redistricting.

Fitzwater was the only person who testified Monday about HJR 41. The General Laws Committee, which is chaired by State Rep. Dean Plocher, R-Town and Country, did not vote on the measure.

Similar versions of the bill have been proposed in previous sessions. In prior sessions, opponents have argued that citizens would not have as much opportunity to see their state representatives, because the districts would be larger.