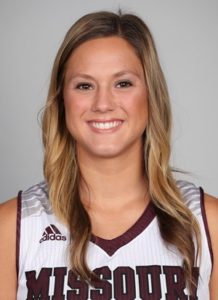 Missouri State stayed perfect on the Missouri Valley Conference road this season with a 77-58 victory at Valparaiso on Friday.

The Lady Bears (16-8, 12-1 MVC) joined the 1992, 1996 and 2004 MSU teams as the only in school history to open a conference season with 12 wins in their first 13 games, and are just the second ever (1996) to start 6-0 in road league contests. MSU’s eighth consecutive MVC road win ties the third-longest streak in school history, and it’s the fifth consecutive season that Missouri State has won 12 league games and six on the road.

The first quarter included five ties and five lead changes, the last during a closing 7-0 run for the Lady Bears capped by Elle Ruffridge’s 3-pointer as time wound down for a 19-14 lead.

Sydney Manning twice hit 3-pointers for seven-point leads early in the second period, and added another during a 8-0 run that resulted in a 38-24 MSU advantage with 4:10 to play. Missouri State’s five freshman accounted for 29 points in the first 20 minutes to help the Lady Bears to a 43-32 lead at intermission.

Missouri State pushed the margin to 15 points early in the second half, but hit only one field goal over the next seven minutes as Valpo (6-20, 2-12) closed the gap to eight points at 54-46.

The Crusaders cut the margin to 58-50 to begin the fourth quarter, but the Lady Bears answered with a 3-pointer from Ruffridge, two steals turned into four points from Danielle Gitzen, and Manning’s fourth trey of the game over the next two minutes for a 10-0 run and 68-50 lead. MSU led by 15-plus points for the final seven minutes.

Manning finished with 13 points on 4-of-5 from beyond the arc, while Gitzen, Jasmine Franklin and Alexa Willard added 10 apiece. Mya Bhinhar scored a career-high nine, and Abby Hipp matched season highs with six points and six boards. MSU shot 44 percent overall and 7-for-15 on 3-pointers. Addison Stoller led Valpo with 22 points.

The Lady Bears owned a 53-30 lead on the boards, led by eight from Franklin and seven from Dariauna Lewis. Brice Calip dished out five assists without a turnover – running her career line against Valpo to 21 helpers and zero miscues – while Gitzen swiped three steals to surpass 150 for her career.

The MSU defense held the Crusaders to 34.4 percent shooting and 7-for-30 from long range.