National Future Farmers of America Week celebrations are being held across the country, including in Missouri. Governor Mike Parson, a Republican and farmer from southwest Missouri’s Bolivar, found a special way to kick off the week.
On Tuesday, Parson rode a John Deere tractor between the governor’s mansion and the state Capitol in Jefferson City to celebrate Missouri FFA. 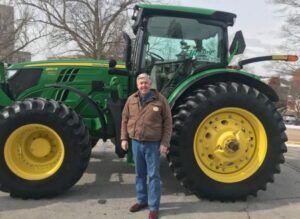 “Well, you know, every day you’re on a tractor is a good day for me. I enjoy it. I was on one this weekend but it wasn’t near as nice as this one,” Parson said.

Alongside the governor in that tractor was Missouri FFA president Paxton Dahmer of southwest Missouri’s Nevada.

“It was remarkable – definitely a once in a lifetime experience and awesome for FFA members to see what it’s like to have a farmer in the governor’s mansion,” said Dahmer.

Parson, a cow-calf producer who continues to work his farm, has advice to young people involved in agriculture – the number one industry in the state.

“Learn as much as you can. Understand where the future of agriculture’s going, through science, through math, through technology,” said Parson. “All of those things are going to play a huge role in how we produce and how we meet the demands of the future. So, if there’s a young kid I’ll be talking out here it’s just tell them how important that role is and remember where they came from. Remember where those roots started.”

By Julie Harker of Brownfield Ag News for America