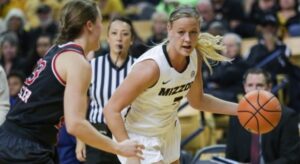 Mizzou Women’s Basketball fell just short against Tennessee on Sunday at Mizzou Arena, falling 62-60. In front of a season-high 8,559 fans, Mizzou and Tennessee had a back-and-forth battle for the full 40 minutes, as both squads shot close to 40 percent from the field, but the Lady Vols pulled out the victory with a pair of free throws with 52 seconds remaining in the game.

With 52 seconds remaining in the game, Mizzou and Tennessee were tied 60-60. Tennessee sophomore Rennia Davis was fouled by Porter on a shooting attempt within the restricted area and headed to the line for a pair of free throws. Davis sunk both shots from the charity stripe free throws to give the Lady Vols a two-point lead. The two made free throws ended up being the game-winning points, as the Tigers were unable to score in the contest’s final seconds.