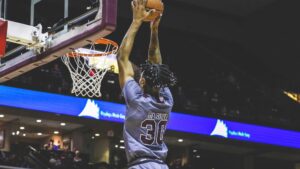 Missouri State shot 63.2 percent from the field and made three free throws in the final 5.5 seconds to score a 65-61 win over Loyola Chicago here Sunday afternoon, pushing the Bears into a first-place tie with Loyola and Drake in the Missouri Valley Conference.

MSU (15-12, 9-5 MVC) got 18 points from Keandre Cook on 7-of-9 shooting, while Tulio Da Silva pitched in 16 points and a game-high nine rebounds. Senior Jarred Dixon scored 10 for Missouri State, which won its fifth Valley road game for the first time since 2011-12.

The Bears led for nearly 30 minutes, building eight-point leads in both halves, but fell behind 56-55 after a Townes layup with 3:55 to go. But after the media timeout that followed, Cook sank a high-arching jumper from the right baseline to push Missouri State back on top by one.

Cook came up big once again a minute later with an athletic play around the rim to make it a 59-56 game. Then, after a Krutwig layup got the Ramblers within one, the Bears used their final timeout with 1:24 left in the game.

Out of the timeout, the Bears ran an alley-oop to Da Silva with 51 seconds remaining to push their advantage back to three.

Clayton Custer, last year’s Valley Player of the Year, responded with a left baseline jumper on the other end at the 35-second mark to make it 61-60. However, with only three fouls called on it the first 19 minutes of the half, Loyola had to foul on four consecutive in-bounds plays to send the Bears to the line.

The Bears weren’t perfect from the stripe in the clutch, making 4-of-7 in the last 27 seconds, but it was enough to keep scoring points and making Loyola run the clock, ultimately sending the Bears to their fourth consecutive win. Dixon, Da Silva and Webster all made free throws down the stretch.

Defense was also pivotal in the final two minutes, 27 seconds. Ryan Kreklow had a steal and an offensive rebound, Webster had a blocked shot and a rebound, and Da Silva snagged a big defensive rebound, providing empirical evidence of the club’s “Defend No Matter What” montra.

“A total team effort,” said Bears head coach Dana Ford. “Our guys handled everything Loyola threw at them. Those guys (Loyola) are champions. They won our league, won our tournament and went to the Final Four. But our guys responded every time they were challenged today.”

Loyola, which had only nine rebounds in the first meeting between the clubs on Jan. 23, wanted to run the floor every chance it got in the rematch. But despite LUC tallying 38 points in the paint for the game, only six points came on the fast break, and the Ramblers notched just three offensive rebounds.

In the first half, Missouri State overcame 10 turnovers with solid defense down the stretch, forcing the Ramblers into missing four of their last six attempts. Meanwhile, the Bears used 3-pointers by Kreklow and Webster over the last four minutes of the half to erase a two-point deficit and lead 27-26 at the midway point.

With just four games left in the regular season, MSU hosts Northern Iowa this Wednesday at 7 p.m. at JQH Arena, where the Bears play three of their last four contests.