McMurray and his car survived two wrecks in the Daytona 500, but a third one two laps from the finish left his car too badly damaged to continue. 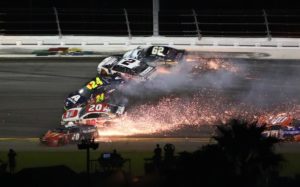 McMurray started sixteenth and was one of six cars in a turn-two crash on the forth-ninth lap.  The incident left his car with right front damage that was repaired with tape.  Despite the damage to the car’s aerodynamics, McMurray was able to lead six laps, thanks to pit strategy, late in the race. But his car could not keep up with the top competitors and he was running well back when twenty-one cars came together with ten laps to go.  McMurray managed to avoid that carnage but the final crash with two laps left ended it for him.  (He’s in car #40 at the bottom left of the screen)

McMurray, who is 42, began racing go-karts—and still  does—and moved to late model stock cars under the mentorship of the legendary Larry Phillips, running on tracks in southwest Missouri.   He joined the NASCAR truck series in 1999 and ran his first race in NASCAR’s number two series the next year. 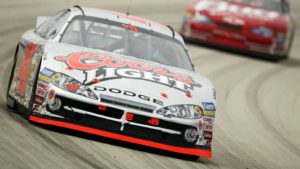 In 2002, he moved up to the Cup series to fill in for injured Chip Ganassi Racing’s Sterling Marlin and set a modern NASCAR record by winning his second start, a 500-mile race at Charlotte.

His career was marked by wins at the series’ most important tracks and he was recognized as one of the best competitors in restrictor-plate races.  His second win was the July race at Daytona in 2007.  Two years later he won for the first time at Talladega and followed that by winning the Daytona 500 in 2010 (below). 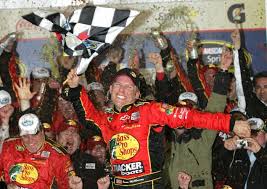 He also won at Indianapolis and again at Charlotte that year.  He won his seventh, and last, Cup race at Talladega in the fall of 2013.   McMurray also won the 2014 all-star race at Charlotte, a race that carried no points but did carry a million-dollar payoff. 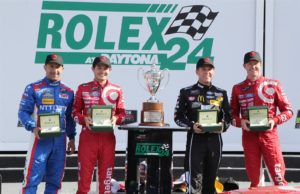 His career scorecard shows seven wins, 63 top five finishes, 168 top tens,  and eleven poles in 583 races.  Five of his seven wins came with Ganassi. The other two came during a four-year stint driving for Jack Roush.

Now it’s on to a new career, joining Dale Earnhardt, Jr., (right) and Jeff Gordon, drivers he raced against, in the broadcast booth. Earnhardt is with NBC.  McMurray will join Gordon at FOX.  He dipped his toe in broadcasting waters last fall with some appearances on FOX’s “Race Hub” and did some guest analysis for some Xfinity races.  “I really enjoyed it more than I expected,” he said in a FOX press release. “It’s a whole new world, but that’s what I am most excited about—the new challenge and discomfort that comes with doing something completely out of my element.” But he’s not abandoning the race track altogether. 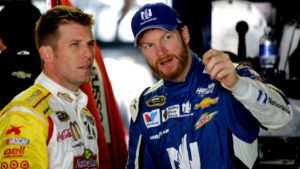 And the racing helmet and fire suit hasn’t been put in a truck and stored in the family attic.  McMurray says he might like to drive some NASCAR road races, or dabble in sports cars if the opportunities arise.  Otherwise, the new career(s) will give him more time at home with his wife, Christy, and their son and daughter. 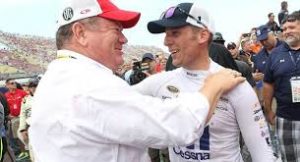 If Missouri NASCAR fans need a Missouri driver to root for, we have Clint Bowyer, who we “adopted” a couple of years ago.  Although he’s an Emporia, Kansas native (which isn’t too far into Kansas), he likes to spend his free time in the summers at his place at the Lake of the Ozarks.

Bowyer ran most of the day in the top five at Daytona until that last big crash that took out McMurray also ended his day.  He was awarded 20th place. McMurray wound up 22nd.