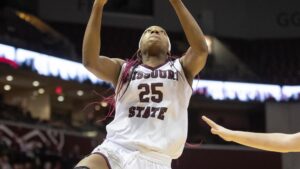 Illinois State used a closing 14-6 run over the final two minutes Friday for a 60-56 win at JQH Arena, halting Missouri State’s winning streak at 13 games and handing the Lady Bears their first loss since Dec. 16.

The Lady Bears (14-8, 10-1 Missouri Valley Conference) fell to a tie for first in the league standings and still control their own destiny in the Valley race, despite seeing their streaks of 17 MVC wins (371 days) and 13 home league victories (404 days) come to an end. The Redbirds (14-9, 7-5) climbed into a tie for fourth place with the win.

Neither team led by more than three points until MSU’s Dariauna Lewis scored off an offensive rebound for a 33-28 advantage with 3:13 left in the third quarter, but the Redbirds opened the fourth period on a 6-0 run to go ahead 39-37 with 8:02 to play.

Brice Calip’s and-one got MSU the lead back during a 7-0 run that resulted in a 46-41 lead, and Jasmine Franklin and Alexa Willard scored on consecutive possessions after ISU tied the score to make it a 50-46 Lady Bears advantage with 2:03 on the clock.

After that, the Redbirds scored eight consecutive points to go up 54-50 with 24.9 seconds left, the Lady Bears scored quickly three separate times to stay within striking distance, but ISU made enough free throws to seal the win.

Illinois State owned a 35-33 rebounding lead, handing MSU only its third loss on the boards this season, and shot 18-for-27 at the foul line compared to 8-for-9 for the Lady Bears, who had attempted more free throws in 12 straight games entering the night.

The Lady Bears shot 37.5 percent from the floor and 0-for-14 from beyond the arc, but forced 23 ISU turnovers and swiped a season-high 14 steals.

Franklin scored 12 points on 6-of-8 shooting, and Calip added nine to surpass 500 in her career while nabbing a career-high five steals.

Previous Post: « Winter weather has been deadly in Missouri; I-70 in Concordia has reopened
Next Post: Winter Weather Advisory issued for much of Missouri »